Yesterday we spent the night in Hornsund, and while some of the team were busy with van Veen grabs and box corers, the drone team (Ana Sofia and Martin) together with Daniel and Jana (sound artist) took the small boat Røde Reke out for a trip find some seals to film and record. The weather was brilliant; flat sea, ice floes, and a warm sun. We couldn’t have asked for more! After a bit of searching, Jana could hear bearded seals far away, using her hydrophones. We decided to head towards one of the large glaciers in the fjord and try to locate them. We detected a bearded seal pup on an ice floe a few hundred meters away from our small boat and we calmly and quietly landed on a larger floe some distance away. Ana Sofia and Martin prepared the drone for takeoff from the ice floe, while Jana was listening from the boat. We made the first flight and could see the drone flying over the seal with the naked eye, but we could not see the seal in the drone image – where was it then? On the second flight we saw a seal swimming near an ice floe and decided to film it for a bit. Suddenly, something started moving on that ice floe and we immediately saw that it was another seal. This must have been the seal we first saw, but laying with its pale belly upwards making it difficult to see against the ice. So, it turned out we had a bearded seal mother in the water and her pup resting on the floe! We stayed with them for a few more minutes and brought the drone to a lower altitude to see them a bit better while the mother was guarding the pup. Soon after, the pup went into the water and we recorded some quite lovely moments between the two just before the drone battery started to report that it was time to go back and end the day. Jana did not hear the two seals under the water, even when they came towards us after the drone had landed. A good demonstration that sometimes marine mammals may be present but don’t vocalize. This was definitely a day that will stay in our memories for a long time.

Pilgrimage – the act of journeying to a sacred place

How to conduct field teaching with students scattered around the world? 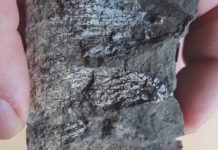 TED-Ed video: Why are earthquakes so hard to predict?

Pilgrimage – the act of journeying to a sacred place

2000 leagues across the seas – some reflections from a land-based...